ISOFIX (or LATCH) has become the international standard for all automobile and child safety seat manufacturers. This anchoring technology minimizes installation mistakes and optimizes the protective effect by means of a solid connection between child safety seat and vehicle, developed by ISO (International Organization for Standardization)

Please look for these icons on your car

The ISOFIX / LATCH standard (ISO 13216-1) sets technical requirements to secure a children seat to car seats in easy, simple and right placed. At Fixeta we have made a side development of this standard to allow you carrying your luggage on your backseats, in safe way.

ISOFIX / LATCH is a universal standard, mandatory in every car sold from 2002 in the United States, and 2007 in Europe, which specs includes two small anchorages in the base of the rest of the seats (sometimes hidden by plastic pieces), like the ones shown in the pic. 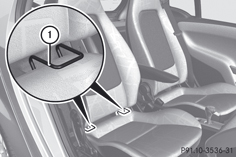 ISOFIX / LATCH anchorages usually are on backseats of the car, even though some models include those anchorages in passenger’s too. You can recognize them because of the icons you see in the image below, by an ISOFIX / LATCH label sewed, or in driver’s manual.

Enter your name and email and get the weekly newsletter... it's FREE!

Give us your email and we'll keep you updated.
Your information will *never* be shared or sold to a 3rd party.
Get all our updates: